I was so excited when I saw an exhibition of Performa‘s archives in London’s Whitechapel Gallery. Do you remember one of my first blogs, where I said I want to be RoseLee Goldberg? Well, Performa is one of her children.

Founded in 2004, Performa influenced the direction of museums and biennials by incorporating historical and newly commissioned live art within a network of public and private venues. Since its inception, the biennial has presented over 64 new works, and over 450 artists have collaborated with numerous curators to stage extraordinary cross-disciplinary events involving dance, film, music, architecture and food.

The exhibition here is actually a video screening of various commissioned artworks that were a part of Performa from 2005 – 2015 and are on display for the first time outside of New York.

Press release stated: ‘Screening footage of over 20 selected commissions that debuted as part of the Performa biennial, this display exhibits significant performance works from the past decade and examines the impact that the organisation has had on the development of live art over the past twelve years. Working closely with artists across mediums, each commission is the product of research and experimentation developed in tandem with Performa’s team of curators to challenge artists to create live performance, often for the first time.’

I was very happy that I was able to witness this historically important happening, however, I have to admit, I was a bit disappointed.

There are different screenings on different days of the weeks (6 September 2017 – 4 March 2018) and it is a bit confusing. One really has to consult the web page prior to visit and get organized, if one wants to see a particular video. When I came into the screening room, I had no idea which video I was watching. It might work as a nice surprise, if you just casually visit the gallery. But I was very much interested in what is showing. I saw that the programme is written on the other side of the room, but it was in the dark, so you could almost not read anything. Also, the times of the screenings were wrong. Later I found a gallery sheet with all the right info and descriptions of a videos. A bit too late, don’t you think? What bothered me the most, was that there was no evident description/title and the length of the movie on display.

Another thing that annoyed me is the space where the projection is. I am familiar with the big space in Gallery 4, but I feel it is not suitable for the job. Every time that someone opened the door (and it happened a lot, as you have to come in, if you want to see the videos), the video got luminous and bright. Actually, the room is too bright in general and I definitely missed the ‘black box’-ish approach. It would work much better as the main focus of the exhibition are the screenings. In addition, the doors creak, which is quite distracting … Did the curators maybe wanted to conjure up the homeliness? I am not sure it worked.

I also missed a bit more comfortable sitting. Conisdering the videos go from 4 minutes to 12 hours, one would expect cozy deckchairs (or was that just my wishful thinking).

While I was watching one of the videos (I later found out I saw Tori Wrånes and Wyatt Kahn’s performances) I couldn’t help but notice the awful quality. It really looked home-made. One would expect much better archival documentation, however, there is always the question of the preservation of ephemeral arts. I guess we can just be happy that we at least have something to put in the archive!

I forgot to mention the reading corner (a part of the same room where the screening is, with all the reading lights on), where one can flick through the books on Performa and performance art. A nice addition, but still not enough context.

I was happy I managed to see some of the videos and I enjoyed them despite all the thoughts about the ‘wrong things’ that were flying around in my head. Yes, as a curator, I would present this archive in a different way. What would I change, you ask? Just wait and see, maybe someday I will get this opportunity..

There is also a talk by RoseLee on 5 October, which I am sadly going to miss. But it will definitelly be worth attending. 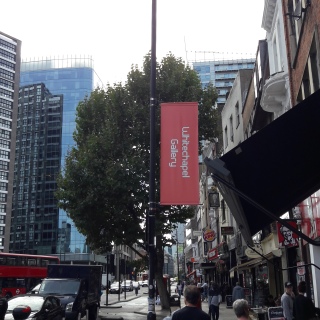 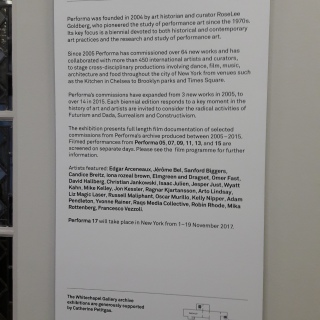 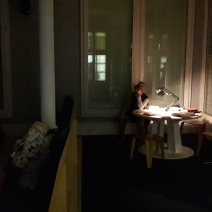