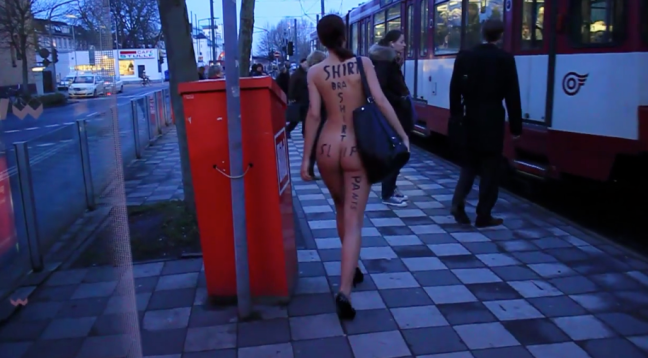 My ideal performance art project would take place in an institution as well as on the streets. I have been asking myself the question of whether there is a space that is the most appropriate for the execution of a performance art piece. Artists can present their work outside in a public space or inside an art institution. Which space is more suitable depends entirely on the artist and what he/she wants to say with his/her art piece. Art in a public space has a different concept than the one in an art institution. It assumes that the street is a place where unsuspecting passers-by are walking and a performance art piece can represent a great shock for them, because they do not expect it. The piece is tossed into a world of coincidental passers-by that can react turbulently. However, a performance art piece in a cultural or artistic institution is expected and consequently accepted differently. In addition, visitors that come to see it assume what to expect, because they pay a ticket for that specific establishment. The most restless reactions usually follow body art performance pieces, because they mostly include nudity of the artist, which is something people are still not comfortable with.

Considering my enthusiasm for the distorted perception of a human body in today’s society, I would like to explore the concept of ‘it’s what’s inside that counts’ through performance art pieces that would take place in The Holburne Museum, as well as the streets of Bath, UK. I would propose an open call (An art institution sends out an open call with or without a theme, to which various artists respond. Then a process of selection commences, choosing the artworks that will produce a final project. It is generally open for every artist, professional or ‘amateur’, who wants to show his or her work to the wider public.), having many experiences with producing art projects in that way, seeing the variety of artworks a curator gets to choose from, giving him/her completely open hands on what he/she wants to show the public. What is exciting to me working with that model, especially in performance art, is that even non-professionals can participate with enticing ideas and get the needed help of setting them up. The topics I would suggest to the artists are body image, self-perception, vanitas and insecurities. Artists could draw inspiration from Rachel Maclean, Jana Sterbak, Carolee Schneemann, Milo Moire, Ron Athey, Orlan, Ulay, Guerrilla Girls, Adrian Piper, for example.

I believe that seeing ‘different variations’ of the human body up close would stimulate the museum visitors and passers-by to contemplate the ideas that were implanted in their minds through contemporary social media. It is on us, today’s society, to cut the maliciousness of embarrassing the norm of the human body and art has the power to tackle the issue at the core, bringing it to random people who do not necessarily visit the ‘intimidating’ galleries.

One thought on “And my performance art project was born..”