And here is my secondary research project on the subject of “clutterness”. One has to start at the beginning, right?

Unfortunatelly through this task, I won’t be able to answer any of my questions. So who knows, maybe this will actually be my masters thesis, because I really need an elaborate explanation on the subject, as it is still strange to me.

“My interest lies in determining a shift of an exhibition space from French Salons to a modernist white cube and back to closely hung art works and cluttered walls. As a first source, one should start at the beginning. National Gallery of Australia has a web page, dedicated entirely to a chronology of Paris Salons and a list of catalogues on the subject, which is a very useful tool to start researching Salons. An article ‘Talking about Art: The French Royal Academy Salons and the Formation of the Discursive citizen’ (Ray, 2004, pp. 527-552) in Artistic Interactions further researches the aesthetic judgement in 18th century Salons and how art drew people into collective discussion. The author proposes that a political dimension of art has less to do with specific content and more with the pursuit of autonomous taste. Kale’s book on French Salons (2006) challenges this conventional thinking of them as only a venue for apolitical social gatherings and shows that they actually provided ready-made venues for aristocratic politics during the early years of the French Revolution, when Salons were transformed into places where the upper classes could express their political opinions and concerns. French Salons: high society and political sociability from the Old Regime to the revolution of 1848 (Kale, 2006) offers an original, penetrating and engaging analysis of elite culture and society in France before, during and after the Revolution. He also wrote the article in French Historical Studies (Kale, 2002, pp. 115-148) that proposes similar ideas as his later book (Kale, 2006), but mainly through argumenting feminist scholars and historians. 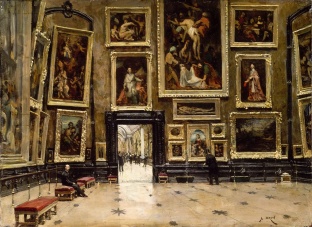 Next research book is a collection of three articles that were first published in Artforum in 1976. In it, O’ Doherty (1999) discusses what the highly controlled setting of the modernist gallery does to the art object, how we view the subject and how the context devours the object. It is the main book on white cube galleries; a technical term author himself coined. An article ‘Victorian Culture and the Museum: Before and After the White Cube’ (Barringer, 2006, pp. 133-145) talks about Victorian museums in Britain and how the Victorian culture is viewed and assessed today. The author argues that today’s curators should learn something from their Victorian predecessors and that modernist museum practice of pure white walls should not be superior. In the references of the previous source, I found the book that tries to describe why visiting art galleries became one of the privileges and duties of the citizen. Taylor (1999) analyses social, aesthetic and political relationships of the galleries in a single example, through the city of London. Museums such as National Gallery or Tate Gallery receive major academic treatment that helps understand Victorian museum of Barringer’s (2006) examples even more. 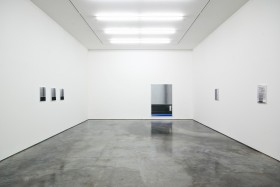 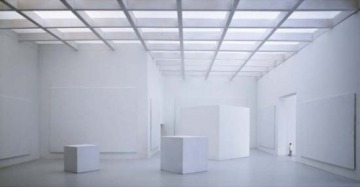 A book The exemplary museum: art and academia (Glesne, 2013) consists of four reports, where each one focuses on one of the research questions that would ensure a long view of »the campus art museum« and its manifold contributions. What do academic art museums and galleries contribute to and how do these museums enrich student’s personal and academic lives. Glesne (2013) explicates how people interact with the campus art museum beyond the academic curriculum, which goes hand in hand with Taylor’s (1999) words. Another book examines the gallery interiors of Europe and North America and offers a detailed account of the different displays (from the background colours to the density of the artworks in an exhibition). In Spaces of Experience: Art Gallery Interiors from 1800 – 2000 Klonk (2009) shifts from Victorian era museums to 20th century, when display strategies changed a lot. In an interview about the best books on contemporary art (accessed online at http://fivebooks.com/interview/hans-ulrich-obrist-on-contemporary-art/ on 10 November 2016) Hans Ulrich Obrist, one of the most influential curators and an artistic director of London Serpentine Galleries, recommends Klonk’s (2009) book. For him it was a very interesting read because he found out how one can make extraordinary experiences possible and accessible for everyone. In the new edition of the book The Museum Experience (Dierking and Falk, 1992), The Museum Experience Revisited (Dierking and Falk, 2013), the authors build on the insights of the initial volume and enrich the book with updates that reflect subsequent studies and research findings. They focus on personal, sociocultural and physical contexts of the museum and its visitors. Their reviewer Francis (accessed online at http://www.tandfonline.com/doi/abs/10.1080/10645578.2015.1016375?journalCode=uvst20& on 10 November 2016) explains the book’s contents in a more detailed way. Dean (1996) elaborates a subject even more in his book Museum exhibition: theory and practice. He expresses his thoughts about how museums in the late 20th century have become multi-dimensional organisations that had to adapt to consumer-oriented world. The author also provides a reader with an overview of the areas where knowledge is needed to accomplish the institutional goals, i.e. the making of exhibition. Four curators, who offer very different approaches to the craft of exhibition making, show some of the possibilities and challenges of working with the medium of the exhibition and describe the importance of the appearance of exhibitions in a book Crafting exhibitions (Adamson, Lind, Ylvisaker and Zamecznik, 2015). Reader can grasp the processes that go into making an exhibition through showing different modes of working with exhibiting. Eleven essays in Spectacle and display (Cherry and Cullen, 2008) investigate how the presentation of art objects derives and conveys meaning from multiple sources, as well as how the objects’ proximity and visual relation to one another in arrangement of display works. It is an authoritative analysis of how art is displayed and presented. 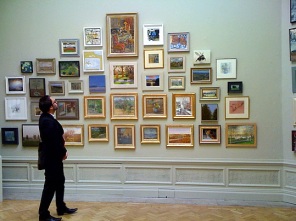 Another book (Graciano, 2015) that is a collection of essays examine the roles, functions and successes of singular displays of art, which were designed without the sanction of an established art authority (outside of an academic context). It uses and contextualizes eleven case studies to advance some overarching themes and commonalities among alternative exhibition spaces. It wants to upgrade Cherry and Cullen’s (2008) discourse, as their book deals primarily with the conventional museums. Active curators and historians, whose essays are gathered in a book (Marincola, 2014), address the issue of an everlasting question of what actually makes a great exhibition. They examine the elements of an exhibition from every angle. An interesting addition to my research is an article from an academic journal Vision Research (Yu and Zelinsky, 2015, pp. 142-151), which does not deal with art, but our perception. Two experiments were made about the perception of relative and absolute clutter and how it is invariant to retinal image size. It does not have to do anything with art, but is an interesting insight on how an actual human eye perceives the so-called clutter.”

O’ Doherty, B. (1999) Inside the white cube: the ideology of the gallery space. London: University of California Press.

One thought on “Learning about secondary research”