It’s been a long time (if I don’t count the perennials or the Andy Warhol exhibition in Barcelona), since I visited a very good exhibition that completely stuck in my mind. And a few weeks ago I finally saw it again. I am so glad that I caught it, as it was in it’s last breaths.

First of all, I am always a bit pissed about how expensive the Tate tickets are. Like, 13’10£ for a concession ticket?? It is definitely too much for a regular student, especially if one also wants to visit Tate Modern’s temporary exhibitions. But ok, I wanted to see the show and I paid. Worth it (even though you were not allowed to take photos)!!

However, I was thinking about what’s up with this year. A few of the most prominent exhibitions were on minorities, such as black and queer art (Soul of a Nation in Tate Modern, for example). Is this the year of pointing out the discourse on forgotten and discriminated? Well, it was about time, still it is a bit odd how everything is happening at the same time and I have to question this..

Anyways, this exhibition is divided on chapters. Each chapter is introduced and described in great detail, which helps with understanding the artworks and getting the flow. You could definitely spent the whole day there, as every artwork had an extensive caption about the artist him/herself and a description of his/her practice (although, I did find some typos). And yes, not surprisingly I took my time and 4 hours later I was out in the sun again. Funny, as the exhibition wasn’t actually that big..

Here are some of my insights and feelings that went through my mind when walking around.

When you stepped in the first room, you would never guess that the topic is about gay culture. It felt more like a collection of renaissance and romantic works. But hey, the show did start with the works from 1861.

Simeon Solomon dominated in here and what struck me the most was, that even though his artworks are full of sexual ambiguity, he did exhibit at the Royal Academy. They say that the audience at RA did not notice possible homoerotic interpretations, but were more appalled by partially nude men and women together in the same painting. Interesting.. This thinking is not really reflecting the Victorian fascination with the eroticised working-class body.

Overall, the sexual tension of that era was shown very subtly: androgynous beauty, flowers, partial nudes and delicate poses of mythological people. Also, male artists depicting male nudes. I really loved the beautiful paintings (am I allowed to say ‘beautiful’?) and the stories. Did you know that in the late 19th century same-sex relationships between women were not always regarded as incompatible if they were in a heterosexual marriage? What a discrimination, considering male same-sex relationships were punishable by death..

Well, yes, some exhibited works have an uncomfortable undercurrent regarding the age of nude models.

A needed mention: Henry Scott Tuke, Hamo Thornycroft (I found loads of artists I have never heard of that now have my heart) 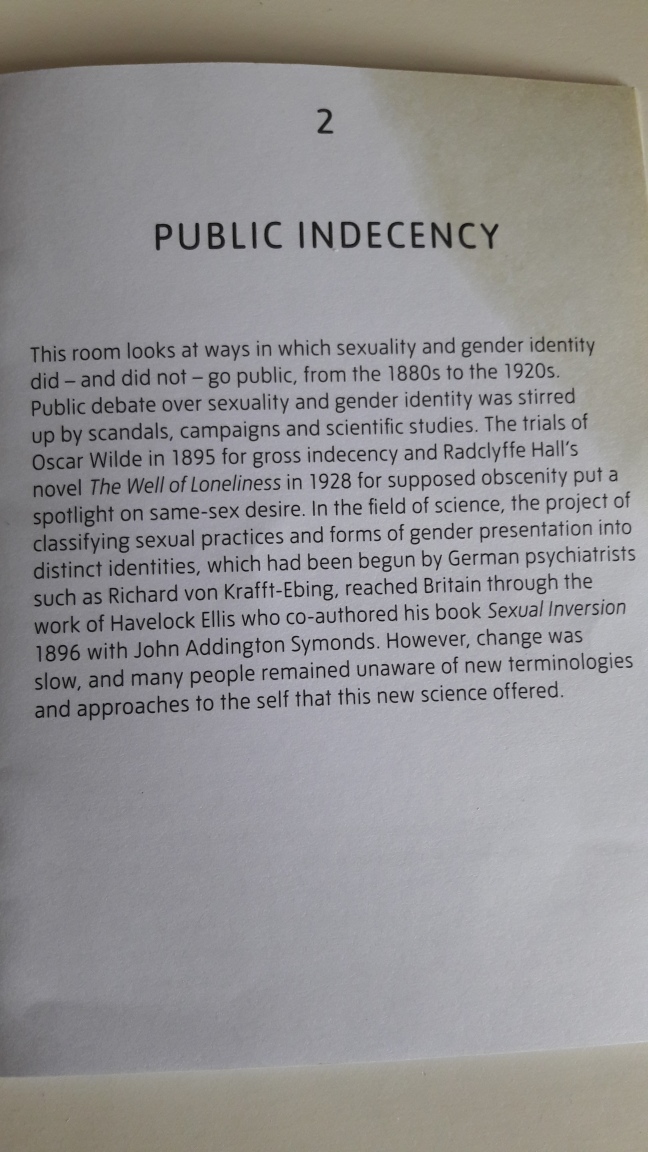 This chapter showed the portraits of (mostly) men connected to the public debate of sexuality, gender and identity.

Michael Field was an artist, or should we say two artists with a shared identity. Wait for it.. An aunt and a niece who were lovers. What could be a better example of this discourse..

Charles Buchel’s ‘Radclyffe Hall’ is a portrait that even became a queer icon (her costume and her hair proudly define queer people, or so it is said).

The trials of Oscar Wilde played a big part in this exhibition. Even his prison door were exhibited. ‘They are locking us up to keep us all in the closet. But we found the keys.’ This is a response of one of the visitors. Allowing the audience to write their statements was very neatly done and should be encouraged even more. They were located throughout the whole exhibition, accompanied with quotes and responses from well-known LGBTQ+ figures, making the show even more on point.

I did not know that all these iconic British people existed and how they fought for their rights in the late 19th century. Thank god, I am more educated now after visiting Tate. I mean it.

The chapter presented public expressions on a stage, sometimes ‘mangled and mutilated’ by censors. Gender swaps on stage were not perceived as queer, drag or transgender, even though some actors were openly gay. What is interesting is that it was actually perceived as a respectable family entertainment in the early 20th century.

There was also ‘queer music’ on the headphones to listen. These songs were a popular entertainment then and gave a voice to queer perspectives. 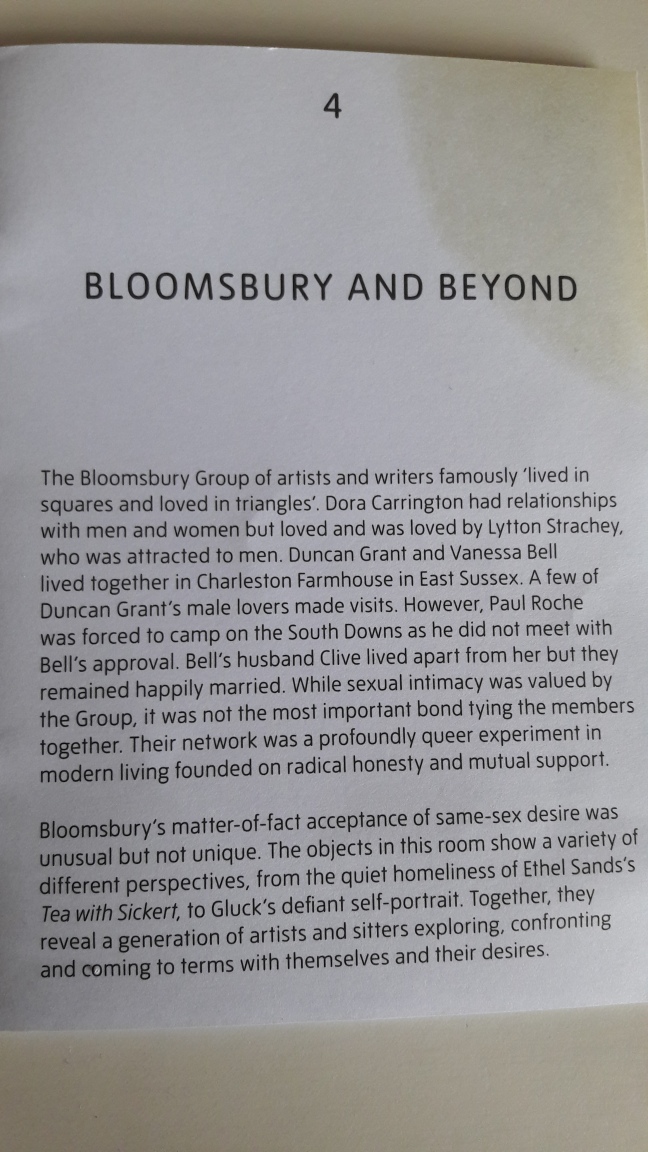 In this room a group of artists, who accepted themselves as homosexuals or bisexuals or living in a ménage à trois were exhibited. They pushed a very subtle ‘in your face’ with their paintings of houses and interiors where they lived together in their non-secret relationships. This unrestrained sexuality could be seen in other artworks, which were full of homoerotic charges. It was also typical that they objectified black men and their exoticism. There were some artworks that much more openly depict homoeroticism; however, they were for personal consumption only (mid-20th century).

This was a room of ‘emancipated’ women. Women were painting female nudes for a criticism of subverting the hierarchy of male artists and female models. Sculptures, books and photography was also exhibited.

This chapter was conveying dangerous allure of homoeroticism with taunting depictions. However, artists were concerned if their desires would be shown in their work.

Showing a witch hunt for gay men and decriminalization of it with the hopes of changing the law, finally. Interesting to see how artists fought for their rights to be human. The works that were witnesses to a widespread queer culture were exhibited (photos, letters, …).

How to use naked wrestlers as homoerotic material.

Also presented were some (to me) not so known works of Bacon and Hockney with playful hints of exploring sexuality. Like, I am so ashamed now, but where the hell do I live, that I was not aware (in such grave detail) that Bacon was so gay? I guess it completely slipped my mind and if I think about it, reading his paintings was always a pain in the ass with so many undertones.

In the room, it was also shown how photography of male health magazines transformed the gay community. These magazines (known later as ‘beef-cake’ magazines) were easily purchased and showed the men they were not alone in their struggle. 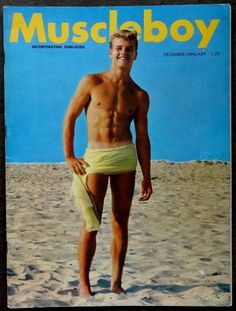 In the last room there was a ‘write a caption’ sign, where visitors could contribute their thoughts, which were later exhibited next to some artworks. You could also watch contemporary short films of LGBTQ+ individuals, which was nice, as I really wanted to sit down for a bit.

I can’t believe it is still so hard for homosexuals, as they still have to live in secret in some countries, even though we supposedly evolved so much, but it is still not accepted. For me, your sexuality is central to what you are; therefore, it should be out in the open (as Ian McKellen said in one of the movies) and accepted, not as a flaw, but as a part of human lives.

All in all, the exhibition was produced amazingly good, taking us through all the important eras in history. It was very informing and thought us a lot.

Also, it definitely encouraged homosexual visitors to open themselves and gave them courage while noticing the dedication of the presented artists risking everything to be who they are.